The Cofhuat is engaged in vigorous action in its various fields of competence, some are permanent, others respond to new needs. Its objective is to be able to render services to its members, whenever requested by the news: his website has been renovated and allows it to give the maximum of information on all the work done so far and ongoing programmes. Thanks to the effort made by our friend Bernard Aubert, a ranking is underway which will facilitate the querying of the site. 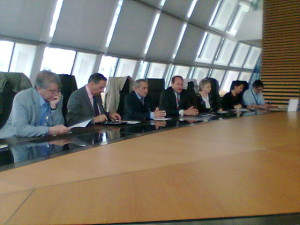 She chooses with them subjects on which knowledge – do exist in its midst and in which his network of relationships can bring out useful proposals. She organized the joint work of the volunteers who dedicate some of their time.

For this purpose several working groups have been formed on the following subjects:

1 / in the field of transport, how to support instead of rail, interventions for several years of the Cofhuat to the Government and SNCF network, the latest is located in the folder of the Council. Its goal: protect the future of industries that need the railways for their supplies and opportunities for their products.

2 / in the area of housing, a working group constituted itself on the accommodation of employees in partnership with Bouygues Immobilier, first meeting before end of April

3 / in the field of the development of the territory, the Cofhuat continues its support to the development of very high speed satellite as well as to the uses that need to develop: homecare for the elderly in partnership with Orange. It supports the initiatives taken by the CDC in the area of telework

4 / in the area of urbanism, a partnership is engaged with Veolia on several topics: convention being signed in the folder

It urges actions whenever the legislative and regulatory provisions are poorly adapted to the ground. At present, the Cofhuat has been seized of issues of enforcement ALUR in mountain areas, it is in contact with the CEREMA on this subject as well as with the Fédération des Stations de mountain of Haute Savoie.

The conferences were always much success

An upcoming conference, April 22 theme will be: global issues of sea and river transport, including the evolution of the Seine North folder.

A trip is scheduled in Rennes may 3, another will be for Lyon by holiday

the AARSCET and ATRIUM agreed to be the basis of our regional delegations. We are present in Provence Côte d'Azur, with Robert Hénaff, general engineer and in the North with Jean Marc Jullien. We hope to establish a delegation in île de France and Rhone Alpes.

In all our interventions, we rely on the values adhered to by note institution since its creation. The Cofhuat, French branch of the IFHP, is heir to a long tradition of humanism which must support all of our initiatives. In this regard, we took all of the highlights of the history of urban planning since the beginning of the 20th century and created a workgroup consisting of architects historians belonging to different school: École d'Architecture de Belleville, Master of urban strategy of Sciences Po, school special for Architecture we support action undertaken by the Museum of Suresnes. We get closer to the Web that has the same background as we, a century ago, it specializes in the issue of networks and lack of reflection on the frame.

Our goal is to bring together those who go beyond their skills to accept the enrichment of the discussions. Our club cofhuat is the engine and we need to broaden it by linking to our work more people in business.

IFHP which is our international parent company was established in 1913, its rich past must contribute to enrich our reflections. We train many vows to help us proj.eter outwards. Our participation in the title of the IFHP to the activities of the Council of Europe and Unesco, should facilitate the achievement of this objective. But it is not enough. It is important that institutions that form the core of the Cofhuat and who are members, each, more specialized international organizations, think to associate the Cofhuat whenever comparisons can be made in a given field. Our finances are very constraints and we have to rely on others whenever our records call information to collect outside the France.

To take account of the limits of our financial resources, new rules concerning our review must be applied.

Two different scenarios 1 / our working groups have resulted in findings that should make known, without that commitment of our members, the journal is then exclusively on digital

2 / one of our members wish to have messages in which he wishes included in productions of the Cofhuat on paper, a specific financing agreement is proposed. We have in the past with the Ministry of finance, with the Department of the city and with the ASFA. We have the technical capability to respond to other requests but we cannot meet the financing